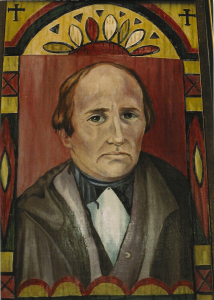 Cynthia Bissell, a Taos artist, painted this portrait of Padre Antonio José Martínez, Cura de Taos in 1974. We met on Ledoux Street in Taos between the Harwood Foundation and the studio of R. C. Gorman where Cynthia was on a short roster of artists exhibiting work there since 1969. My grandfather’s house was across the Harwood Library where I was doing research for my monograph Reluctant Dawn,

The portrait of Padre Martínez, Cynthia explained to me, was done on plywood in the style of the retablos at the historic adobe church of San José de Las Trampas in northern New Mexico, one of her favorite places. She sent me the portrait as a gift when I was in San Antonio working with the PADRES organization. Cynthia moved to Arizona, and is now deceased.

Vicente M. Martínez, a close relative of the Padre, took a color photo of the portrait. When the Mexican American Cultural Center published Reluctant Dawn in 1976, the photo was reproduced in black-and-white. However, the portrait was published in color for the second edition of Reluctant Dawn published by The Taos Connection in 2006 on occasion of the instatllation and unveiling of the Padre Martínez Memorial in The Taos Plaza, La Honra de Su País/The Honor of His Homeland.

For almost three years, while I was Executive Director of PADRES, the national organization of Hispanic priests, the portrait hung on the wall of the PADRES headquarters on Ashby Street across from MACC. After I left, my successor lend it to Archbishop Sanchez of Santa Fe who kept it in his residence until he retired in 1993. Father Albert Gallegos of Belen, NM took possesion of it, but the portrait was lost after Father Albert’s death.

On the occasion of my Golden Jublilee as a priest in the spring of 2014, while giving a presentation on the Cura de Taos at the parish church of Our Lady of Guadalupe, the portrait resurfaced. The Archdiocese had it in storage, and returned it to “its proper home” at the church in care of its current pastor Rev. Clement Nigel. Padre Martínez had served as pastor of the parish from from 1826 until 1858. As rightful owner of the portrait, I took possession of it, and then immediately inscribed my name and date on the back in testimony of my gifting the portrait to the parish for posterity.

Blog about Padre Antonio José Martínez, Cura de Taos. When he died, his peers in the USA Territorial Assembly for NM wrote on his epitaph, "La Honra de Su País" – The Honor of His Homeland. The last decade of his life–in the years following the American occupation– was clouded by controversy with his new bishop. Fray Angelioc Chavez in My Penitente Land called him "New Mexico's greatest son." This blog is dedicated to the life and legacy of this priest, educator, printer-publisher, lawyer-politician, rancher, patriot.